The Impact of Rising Fuel Prices on Hauliers in Singapore

The Rise in Fuel Prices

Diesel prices reached a new high on 12 March 2022, rocketing to S$2.9/L at Shell petrol stations in Singapore, a marked 32% increase from prices in January.

Although prices did drop slightly since the record high on 12 March (as of the time of writing), diesel prices are generally on the uptrend. In fact, between Jan 2021 and Jan 2022, prices have rose 18.8%.

Why are Fuel Prices Rising?

In 2021, surging world demand as the pandemic receded was cited as the primary cause of the rising price. According to the International Energy Agency, an autonomous intergovernmental organization which collects statistics on the international oil market and other energy sectors, global oil demand in the early days of the pandemic plummeted all the way to 83.1 million barrels per day (b/d) in 2021 Q2, from just under 100 million b/d for all of 2019. By 2021 Q4, it was back up to 98.6 million b/d.

Prices were further exacerbated when Russia invaded Ukraine in late February. As one of the biggest oil producers in the world, the invasion of Ukraine by Russia and the subsequent sanctions on Russia and other actions created significant market uncertainties about the potential for oil supply disruptions. These events are occurring against a backdrop of low oil inventories and persistent upward oil price pressures.

As an industry heavily dependent on diesel consumption, any increase in diesel prices takes a huge toll on the haulage industry, especially the ones with a smaller fleet of trucks as they are not able to command economies of scale. Since the start of 2022, some hauliers, having anticipated the upward trend in fuel prices, have implemented fuel surcharges on top of their trucking fees. These surcharges typically range between $10 to $30.

In the past, it was common for hauliers to constantly revise their quotations to their customers in response to the rise and fall in diesel prices. This often drew the ire of customers due to its variable nature. Given the rising fuel charges, the surcharge was thus implemented to cater for it. In fact, bigger players in the industry had already introduced such fuel surcharges as early as 2006.

Is the Fuel Surcharge Reasonable?

On average, each truck runs about 150km to 250km per day, and fuel costs make up to 30% of a haulier’s daily operating cost. Given how heavily dependent hauliers are on diesel, any increase in diesel prices will drive up their operational costs considerably. Without the fuel surcharge, hauliers may instead incur a loss with every trucking job they take. As such, the surcharge is designed for them to reasonably cater for any potential fuel increases, given its volatile prices. 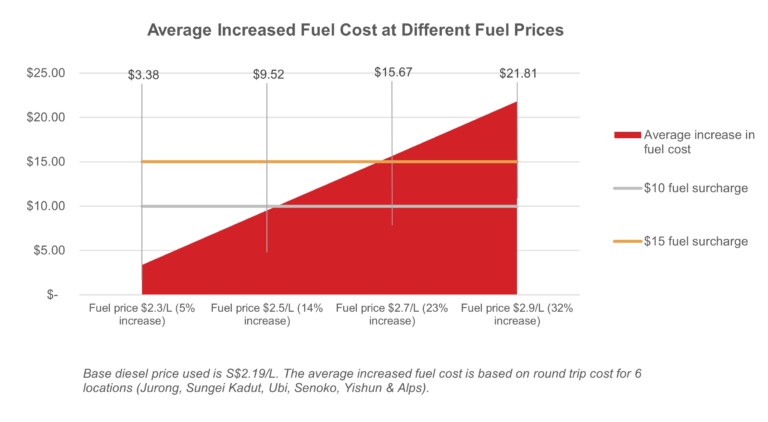 Currently, a common approach by the hauliers is to set a flat rate surcharge to even out their cost among Jurong and out-of-Jurong jobs, depending on the proportion of their jobs. The current market practice of $10/$15 flat surcharge relates closely to the averaged increased fuel cost for rates between $2.5/L and $2.7/L.

Is There a Longer Term Solution?

Given that the situation of increased diesel prices is likely to stay, the current fixed surcharge method will need more flexibility to provide a fairer way to manage the fuel cost fairly in the longer term. Haulio is currently exploring ways to do this, and we will be sharing more in due course

In this article, we have only discussed the direct impacts of rising fuel costs to Hauliers. However, when fuel costs increase, there will be inflationary pressures to all other costs, such as manpower, equipment, maintenance costs. These pressures will become more pronounced over time and Haulio is monitoring these with our partners and more will be discussed in due course.

Get in touch with us below and we’ll get back to you shortly!